Concurrent with the New Media Caucus panel Space: The New Frontier at the National CAA 2009, “@” is an exhibition that examines space and site. With simultaneous locations in Los Angeles and Second Life (SL), “@”challenges artists to consider place & placelessness from within the context of networked culture. The exhibition space features a floor-to-ceiling projection and a streaming video camera, which serves as the interface between the Real Life (RL) in the gallery and its replication in Second Life. The intent for “@” is to exploit the philosophically rich mirroring between RL and SL, as well as the paradoxical condition of being the observer and observed. 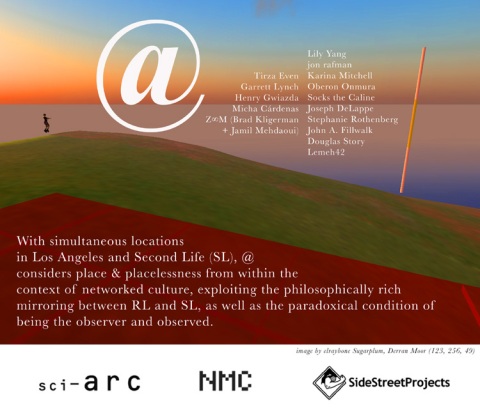 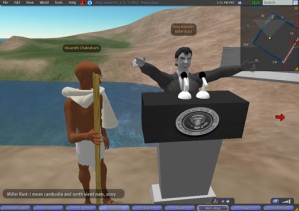 12 more miles today – making a total so far of 206 miles on the reenactment of Gandhi’s Salt March to Dandi!

So I came upon a group of wolf people, not sure what to call them, you can see a screenshot of part of the group below. Upon seeing me as Gandhi, one of them quickly changed appearance to a wonderful rendition of President Richard Nixon, (above) complete with the presidential podium attached to his chest (moved with him, literally) – along with the audio presentation of Nixon’s “I’m not a crook” speech. Quite fun – I posed for a picture with him.

On Thursday, December 18th, a week before Christmas, the Double Happiness factory was almost overthrown by virtual anarchists claiming to be affiliated with the virtual pranksters known as Second Front. The hysterical rioters attempted to take over the factory with at least 300 lbs of explosives and bottles of hairspray. Chanting “Happiness, not Double” while the Dead Kennedy’s “Kill the Poor” blasted from their iPhones, the hooligans tried to force our happy Double Happiness workers to unionize. Only a few avatars exploded but in virtuality no one was hurt in the incident and production continued to run smoothly during the joyous, holiday season.

This video analyzes the relationship between time and landscape. Usually we tend to associate the study of time to the study of space in the calculation of speed. This association of terms is useful only if we have to calcolate speed.
In all the other cases is better to use the term landscape.
Time in fact is the human perception of the earth evolution movement and landscape is the physical space covered by a human person.
This study examines in its specific this relation applied to an airport during a one day time covering. The airport has an area of 1000mts squared.
The day last 1440 minutes.
The video shows the results of this relation of time and landscape applied to the chosen field of analysis.
These results find explication in the Korsakoff’s syndrome, a degenerative brain disorder.

“Icarus” was shot in Cartagena, Spain. The city of Cartagena, situated on the Mediterranean coast, has been the site of the rise and fall – and of manifestations of power and disempowerment – for an array of cultures and regimes, among them Roman, Byzantine and Islam, as well as the Episcopalian Church and the Spanish Republic. During these times the city served – between long stretches of decay, epidemics, war, destruction and subsequent recuperation … 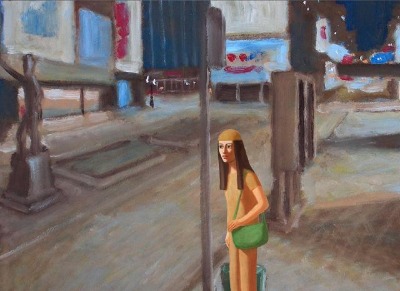 Since the artists have been living in the States for years in self-exile, their cultural meditations deeply concern history, philosophy, and Chinese diaspora, examine current economic development of China in a context of globalization, meanwhile exploring the meaning of virtual online communities in terms of global dialogues regarding cultural root and fantasy of China. The film functions as multimedia component in Land of Illusion project in Second Life.

The project is an immersive art installation in Second Life, the centerpiece of which is composed of approximately 1000 primitive objects which are coated in moving video accompanied by a densely layered sound effects bed. This complex and dynamic object floats over a landscape which is composed of a grid of interlocking sculpty megaprims…